Cart-level promotions apply discounts to a customer's cart without promo codes. Once a customer qualifies for a promotion, the discount is automatically added to their cart.

Here are the key definitions to grasp before setting up your first in-cart promotion:

You can create many levels in a single promotion. The promotion level has its own name, discount, validation rules, and metadata. Levels are meant to offer discounts under different buying conditions.

A stack is a group of promotion tiers that can be applied together as a single redeemable. You can add stacks when creating a new cart promotion.

Information added as a banner is returned in API response. After you integrate a cart promotion with your system, banners can display information about your promotion.

Metadata enables you to add custom attributes to a promotion. Metadata serves reporting purposes and extends the possibilities of API integration. Read more.

To create a cart-level promotion, you need to open the Campaign Manager with the plus

Choose promotion as the campaign type. 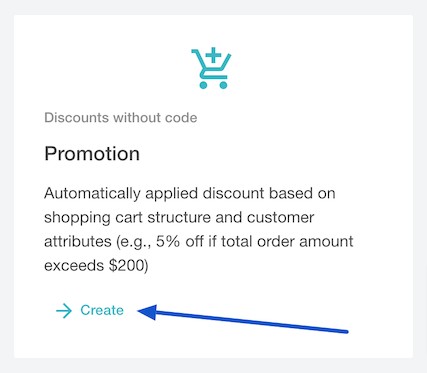 Before your customers are able to use promotions in your store, you need to connect the promotion API with your system. When the integration is ready, Voucherify will validate each order and offer qualified customers discounts from respective promotion levels.

Next, you can set additional time limits that specify when promotion tiers can be applied. All time-related limits are optional.

Promotion levels can have their own timeframe. Otherwise, they will inherit a promotion timeframe (start and end date). When you set a timeframe for both promotion and tier, both  rules need to be satisfied to apply the discount.

Add promotion tiers and configure their details. Each promotion tier defines a specific discount and the conditions needed to qualify for the discount. You can create a single- or multi-level promotion. Each level can carry a different discount and associated validation rules.

Instead of using a static value for a given discount, you can also create formulas with mathematical and logical operators and assign a dynamic discount value. Discounts will be calculated during redemption based on the provided formula and metadata values. Learn more.

When it's ready, confirm the tier with Save.

Click Create tier to configure another promotion level and set up its details. If you want to create a single-level promotion, go to the next step.

After you confirm the second level, you'll see a list with all active tiers. Actions enable the editing or deleting a level.

There is no limit on the number of tiers within a cart-level promotion. With the tiering mechanism, you can implement gamified promotions in your store.

There are two main discount application rules for a cart-level promotion:

If you don't need stacks, choose Tiers only and proceed to define the promotions hierarchy.

If you want to group tiers into stacks, choose Tiers and stacks. Thanks to stacking, you can validate and redeem stacked tiers as one object. It means that Voucherify can validate and apply multiple discounts grouped together at once. 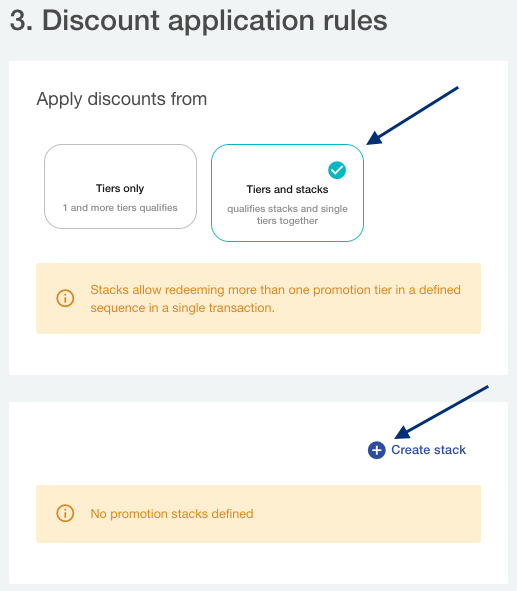 Choose  Create stack to group promotion tiers. First, name the stack and select the tiers to include in the stack. 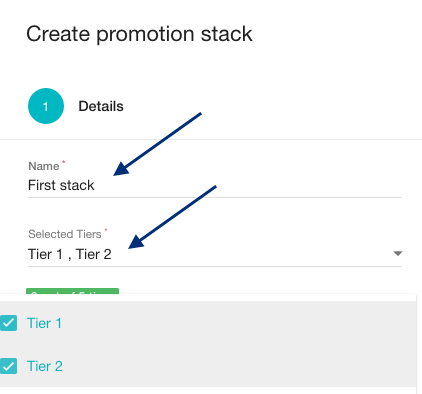 You will see a list of all included tiers. Using arrows, you can change the hierarchy of the promotion levels within the stack. Additionally, you can remove a tier using the trash icon.

Note: The hierarchy of tiers within the stack determines the sequence of tier redemptions during a single order transaction.

Once you create one stack, click Save. To define more stacks, click  Create stack and repeat the steps listed above.  Actions ⋮ allow editing and deleting a given stack. 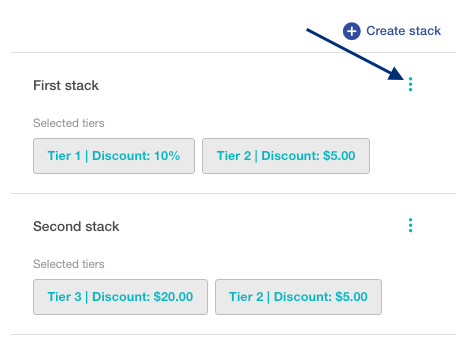 Using arrows, you can change the hierarchy of promotion levels.

In this section, you can assign custom attributes (metadata) to the promotion.

Remember to add all metadata to the Campaign schema. Read more.

In the next step, you can see the campaign summary. You can now confirm the promotion with Save and Release. Voucherify will direct you to the detailed promotion view.

You can edit the promotion settings once the campaign is active. Click on the pencil tool

to open the Campaign Manager and introduce changes in the campaign.

From the promotion view, you can choose a tab to display more details about the campaign.

Did this answer your question? Thanks for the feedback There was a problem submitting your feedback. Please try again later.